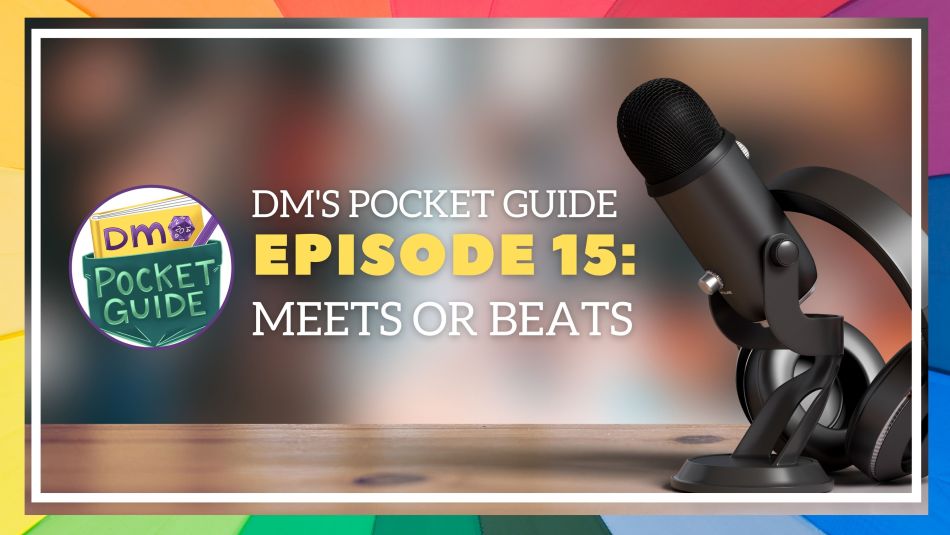 It took us years to keep this rule straight, despite it being in the first few pages of the Player's Handbook!  It took this catchy phrase to nail it down:  "Meets or beats."  Listen today and make sure you're managing dice rolls correctly and consistently! Please like, review, and share to support DM’s Pocket Guide! We’re Tricia and Rachel from Roar Cat Reads.  If you would like to learn about a specific D&D rule or spell, send us a request at roarcatreads@gmail.com.  Transcripts of every episode are available!   If you want more rules, buy a copy of the Player’s Handbook! Follow us on Twitter and Instagram  Artwork by Haley Boros DM’s Pocket Guide is unofficial Fan Content permitted under the Fan Content Policy. Not approved/endorsed by Wizards. Portions of the materials used are property of Wizards of the Coast. ©Wizards of the Coast LLC.

Welcome to DM’s Pocket Guide, where we discuss the rules, spells, and monsters of Dungeons and Dragons, 5th edition.

Tricia: Today, we’re going to talk about the rule Meets or Beats.

T: This is one that tripped us up for a long time, which is kind of embarrassing now, because it’s so basic.

R: Yeah, once you’ve had it explained to you in a way that you can remember it, it is quite easy. So what we’re talking about is when you are rolling an ability check or an attack roll or trying to make a saving throw, if your roll meets the armor class or the difficulty class that’s set out – what happens in that circumstance.

T: So, we are looking at page seven of the Player’s Handbook, which we just found now, we didn’t know it’s very early in the book. And so, I just tend to assume, oh, that stuff is all obvious, I don’t need to look at it very often. It turns out pretty helpful.

R: Yeah. I mean it’s under a section called the D20. So me and my flippant way was just like, I had to roll the d20. I don’t need to know this. Well, yeah, actually there was something in there that took me two and a half, three years to fully get my head around and yeah, okay. So what is the rule?

T: Well, the rule is if you roll and the number meets or beats the person’s armor class or difficulty class then it succeeds.

R: It’s yeah, it’s super simple but it’s one of those moments where as a DM, your player rolls and if you don’t have this firmly in your mind, your player will roll and meet the armor class or the difficulty class and you will have this moment of what happens? And the player is going to look at you expectantly and say what happens and if you don’t have this rule in your mind, the way I always used to treat it was, oh if I don’t know, I’ll just roll in favor of my player and then they’re happy. Okay. Well there’s a motivation for me to change that behavior.

T: Yeah, but the reason that became a problem was ruling in the player’s favor meant that in different situations we were doing different things which kind of just became this weird conglomeration of players, just being like, sure, whatever you say in this moment is true and there was no consistency. And so then how did you end up hearing the term meets or beats?

R: I think just from talking to more people about it and playing with experienced players, that knew the rule or playing in more games as a player. And sort of how coming into contact with it and then having this lovely phrase meets or beats. That is much easier to remember than the actual rule as it’s written.

T: Yeah, that has been a nice thing that when we started playing D&D we were in this very lovely little group of people who had never played D&D before. And so in that way it led to a lot of really fun like role playing and like the sense of anything’s possible, but we did kind of miss some very basic fundamental rules. And so if that is the case for you, that’s why we’re sharing this one. And so what are some examples of how this would play out?

T: You do because you meet or beat it.

R: Okay, I roll 14. One less than the armour class. I would fail. If I rolled over I’m going to hit. If I meet it I succeed.

T: Yeah. What about an ability check?

R: Similar kind of thing. If I’m trying to scale my way up a mountain and I roll a 17 on my ability check, it’s a very steep mountain.

T: Yes, your athletics check of it was a 17 ability check to climb this mountain. You rolled a 17, you meet or beat it. So, you succeed to me, and the last is with saving throws. This is kind of where we would get tripped up. Mmm. But so in this case, if I as a monster am casting a spell at you that requires a wisdom saving throw roll of 14, and you roll a 14–

R: Then I would meet the saving throw and therefore succeed.

R: It’s the person that’s rolling the dice that has to meet. Because with that last example of the saving throw, ok well if it meets your monster saving throw so does that mean it’s succeeded or not? Maybe that’s where we got tripped up a lot?

R: If you’re rolling the dice, you are the one that has to meet in order to succeed.

T: Yes, owner of the dice rolls meets or beats, you succeed. And that is the meet or beat rule on page seven of the Player’s Handbook.