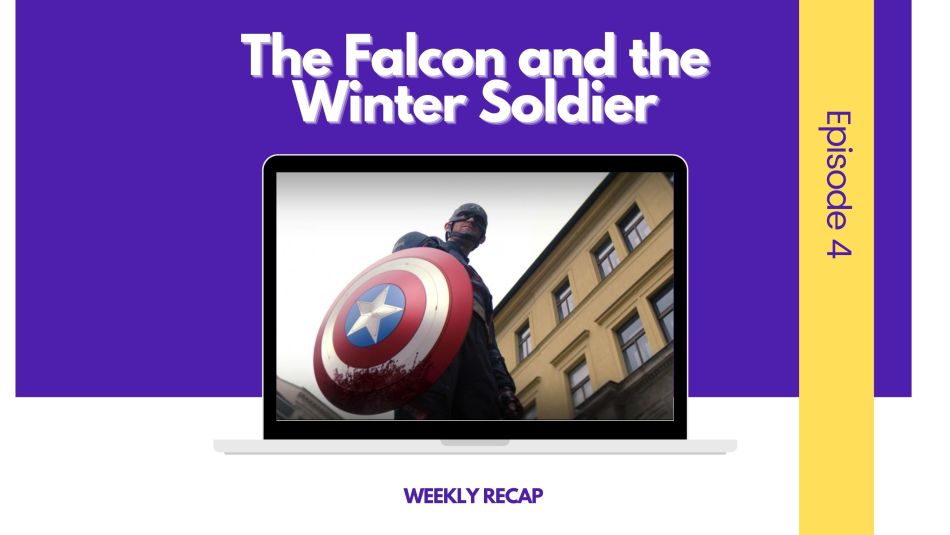 I am now officially confident that The Falcon and the Winter Soldier would have been better if it had been released all at once rather than weekly. Every episode I start with low enthusiasm, but by the time it’s over I’m eager for more. In contrast, WandaVision was a perfect show to be released weekly, because it left us each week with a mystery to discuss and unpack. TFATWS is just one long story that loses momentum when it’s cut into chunks.

Anyway, this was an episode all about Ideas. In particular: Can black and white heroes exist in a grey world? I have to say, I like it! The show could use some space to breathe and show rather than tell quite so much, but I’m really enjoying how I find myself sympathizing with everyone, even nincompoops running around Latvia in red, white, and blue with a shield complex.

We start with the best scene of the night (objectively? Or only for Bucky fans?) in a Wakandan flashback to Ayo helping Bucky break free from the words that have controlled him for decades.. Um, it’s like, really beautiful. I did not expect to be hit with Feels right away!

However, in the present moment, Ayo is PISSED that Bucky freed the man who murdered King T’Chaka. She gives him 8 hours to use Zemo before the Dora Milaje bust in (I am already excited for them to bust in, and spoilers, it’s very good when they do!)

Zemo and Sam set up the basic argument of the show. Now that Karli the super soldier has starting killing people and setting demands, Zemo believes she is a hopeless supremacist who cannot be unradicalized. Sam empathizes with her motivation and believes he can change her mind about her methods if he can just talk to her. They stop arguing about philosophy to grill people about the location of Donya Madani’s funeral. Sam and Bucky get nowhere, but creepy songs and Turkish delights is enough to get Zemo the answer. He tells the children that Sam and Bucky are bad men, not to be trusted, but this does not pay off at any point in the episode. Strange.

Sharon makes some guest appearances to heighten the general tension of the show, insisting that Madripoor is going to get nasty now that the guy who creates super serum is dead. I…really hope Sharon is the Power Broker.

In a runner up for best scene of the episode, Karli and her friend push a SECRET TOMB BUTTON to uncover their SECRET FANNY PACK OF SERUM. Then Karli’s friend admits that he didn’t think there could be another Captain America until he met Karli, outlining the conflict of who gets to be hero quite nicely.

“Today’s heroes don’t have the luxury of keeping their hands clean.”

Sam is going to put his philosophy to the test; he gets ten minutes to connect with Karli before New Cap and Hoskins will ride in. He’s doing great, and they are really connecting! I am simultaneously so happy to see Sam using his counseling skills and so furious that they are literally having a conversation about oppression, and Sam is not allowed to explicitly name being a black man in a racist world. C’mon Disney! You’ve honestly surprised me with some heartfelt commentary on racism in America – just name it!

New Cap screws everything up by guilting Bucky into distrusting Sam’s abilities. Zemo escapes, shoots Karli, and takes the serum….just to destroy them! Interesting! When New Cap knocks Zemo out, he gets creepy music AND a creepy head tilt before stealing the last vial of super soldier serum. This won’t end badly!

Zemo and Sam continue their philosophy talk, and just when I’m ranting about the rich man deciding that gods can’t exist among normal people, Sam is all, “Isn’t that how gods talk?” Yeah, Sam! Unfortunately they are interrupted by New Cap, who no longer opens doors. He kicks them open with patriotism! The Dora Milaje arrive to apprehend Zemo, and New Cap TELLS THEM TO PUT DOWN THEIR POINTY STICKS. Neither Ayo nor I are having any of this patronizing bullshit, and they utterly hand his ass to him. This is also a runner up for second best scene in the episode because of three delicious moments:

New Cap feels bad that he’s losing fights to non-serumed soldiers, and just when I’m at the height of hating him, he wins my sympathy. I really like that he asked Hoskins about the serum, and it made sense that two military men would see its potential for good as outweighing its risk. This line also really hit me, so much so that I was ALMOST distracted from noticing that his profile looks very much like Mr. Incredible’s.

“Three badges of excellence to make sure I never forget the worst day of my life.”

Karli calls Sarah and threatens her children in order to get her to arrange a meeting with Sam. Karli! You could have just asked! Sam is very much in your corner. Which he says when he meets up with her, though he takes Bucky against instruction. It goes badly, because of course it was a trap to lure New Cap to his destruction. It is revealed that he took the serum just before Karli leaps in and super serum kicks Hoskins in the chest. It is…brutal. New Cap is MAD, and I don’t blame him. The episode ends with him chasing Karli’s super soldier friend through the streets of Latvia before caving in his chest with THE ACTUAL SHIELD of Captain America IN PUBLIC while people are filming him.