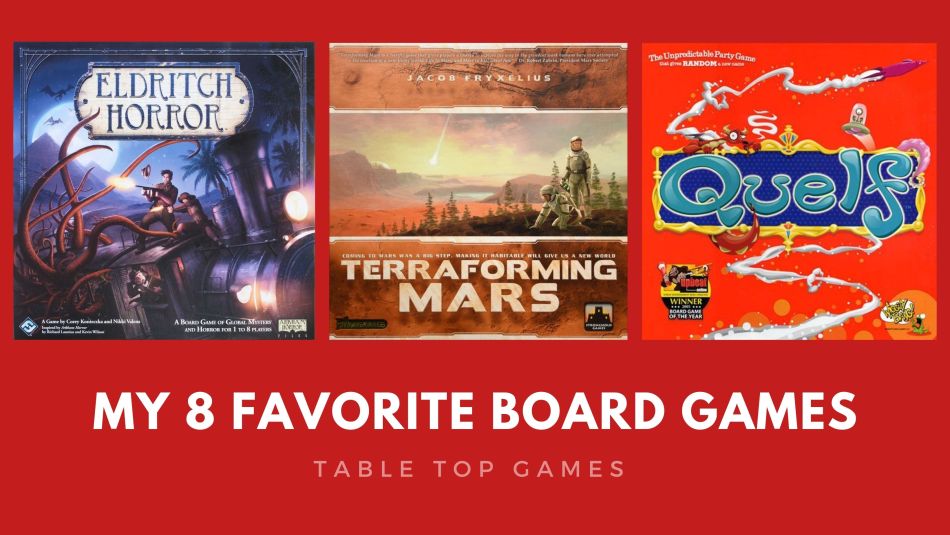 I did not always love board games (the one that I did love was Life – that spinner! the tiny people pegs!), but I have consistently become friends with people who love them. I first warmed to card games when my Midwestern friends hosted euchre tournaments during weekend getaways. Over the years, I slowly got into table top games with Ticket to Ride and Settlers of Cataan. Now, I have become full-fledged board game geek, a title that is bestowed when one voluntarily plays a game for 13 hours (see Twilight Imperium below).

I pride myself on having a diverse board game palate. I want to have games that appeal to different kinds of people, from the silly to the serious and the short to the long. If you are looking for a new game to play, these table top games are ones that I can personally vouch for!

I want to acknowledge that board games can be expensive.  If you don’t think you’re ready to invest in a board game, you can still enjoy them!  You can borrow a game from a friend, check out a board game from the library, or head out to a cafe or pub that allows you to play a huge variety of games while eating and drinking.  (If you’re in the Vancouver area, I recommend Storm Crow Alehouse or Pizzeria Ludica during non-COVID times.)

5-Minute Dungeon (2-5 players, 25 minute gameplay)
5-Minute Dungeon is an excellent game to start the evening.  Each round literally lasts five minutes, so it’s a quick and chaotic cooperative way to get in the gaming mood with your friends.  Using D&D archetypes such as rogue, wizard, or barbarian, you have the option of choosing from five character cards (male or female on either side, equaling ten option in total) to team up and defeat five increasingly difficult boss battles.  The gameplay is simple, as you and your teammates match icons from your hand to defeat a series of monsters and obstacles, and the five minute time limit guarantees that you will be laughing and screaming in an attempt to be victorious in time.

Unstable Unicorns (2-8 players, 30-45 minute gameplay)
Unstable Unicorns is an adorably designed game of killer unicorns with hilarious names and powers (Americorn!  Stabby the Unicorn!) that combines strategy and ruthlessness with seriously, just the cutest illustrations ever.  Build up your stable of unicorns (as well as narwhals, the unicorns of the sea) and try to destroy the unicorns of other players.  It is a simple system with the potential for a lot of clever gameplay.

Quelf (3-8 players, 1-2 hour gameplay)
Quelf is my favorite party game, and I have historically described it as “if you are willing to look ridiculous for 30 seconds, you get to watch your friends look ridiculous too.”  It is out and out bonkers, as you move along the track by miming falling down an elevator or scouring your kitchen for materials to make a scuba mask that must be worn for the remainder of the game.  Sometimes you lose points if you forget to bark at someone entering the room.  It’s the silliest thing I’ve ever voluntarily done on repeat, and it never gets old.

Munchkin (3-6 players, 1-2 hour gameplay)
Munchkin is a card-based strategy game wherein you strengthen your character with loot like the Kneepads of Sexiness and fight monsters, racing to level 10 before any of your competitors.  It’s a lot of fun that never gets old, because holy cow, there are so many expansions.  You can work your way through Adventure Time scenarios or Cthulhu horrors or dinosaurs.  This game has a fairly simple conceit, but it’s heightened with creative twists like giving monsters additional hit points for every drink that’s on the table.

Eldritch Horror (1-8 players, 2-4 hour gameplay)
Eldritch Horror is one of the most complicated, most difficult games I’ve ever played.  In fact, in the three times I’ve played this with groups of experienced gamers, I have never once won.  Yet this only makes me want to try again!  A cooperative game based on H.P. Lovecraft’s novels, you and your friends race to find clues and defeat horrors appearing through rifts all over the world before your health and sanity disappear.  It requires strategy, flexibility, and the willingness to mourn the takeover of planet earth after hours of attempting to prevent the apocalypse.  Defeat was never so fun.

Arkham Horror: The Card Game (1-4 players, 1-2 hour gameplay)
If you’re not a fan of board games that require hundreds of game pieces, switch over to Arkham Horror: the Card Game, which adds role-play to the original concept of partners uniting to defeat otherworldly horrors before you lose all health and sanity.  The card setup is unique, and the scenarios allow you to fail but continue moving forward so long as you note your “two mental traumas” in the gameplay notebook.  Again, this is a game designed to be almost impossible, which should be obvious by the rule that states, “If you are unsure how to apply a rule, choose the option that causes the most pain to your characters.”  So hard!  So fun!

Terraforming Mars (1-5 players, 1-2 hour gameplay)
Terraforming Mars a perfect game for one or two people who want to strategize and create a long term plan, stacking resources and implementing opportunities at just the right moment.  This game wins extra points for feeling like you’re really terraforming Mars.  Points are earned as you raise the temperature and oxygen levels, and you have access to developing microbes and searching for life before opportunities to plan grass ever come along.  An incredibly nerdy and delightful game.

Twilight Imperium (3-6 players, 4-8 hour playtime)
The game of all games.  I first played Twilight Imperium in a group of six, and we played for thirteen hours.  It is a testament to this game that we played again within a month, and the second time breezed by in a quick seven hours.  This complex game somehow manages to never feel QUITE too complicated, though I cannot imagine trying to play without at least one player who has experience.  In this race to conquer the galaxy (which you create with tiles, guaranteeing a new game every time), you can lean into technology, war, trade, or diplomacy to earn victory points and become undisputed champion of table top gaming. (Check out my review here.)

0 comments on “My 8 Favorite Board Games”