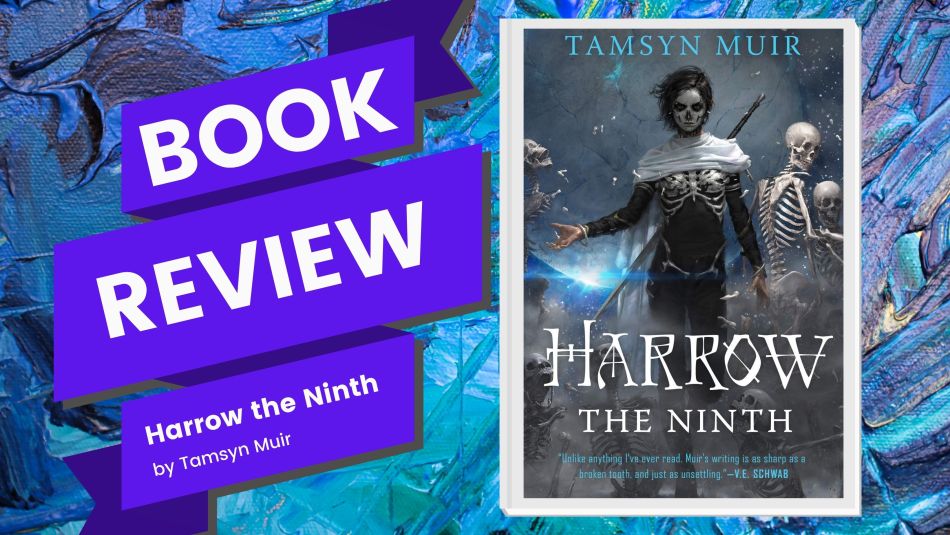 Harrow the Ninth, the sequel to Gideon the Ninth, turns a galaxy inside out as one necromancer struggles to survive the wreckage of herself aboard the Emperor’s haunted space station.

She answered the Emperor’s call.

She arrived with her arts, her wits, and her only friend.

In victory, her world has turned to ash.

After rocking the cosmos with her deathly debut, Tamsyn Muir continues the story of the penumbral Ninth House in Harrow the Ninth, a mind-twisting puzzle box of mystery, murder, magic, and mayhem. Nothing is as it seems in the halls of the Emperor, and the fate of the galaxy rests on one woman’s shoulders.

Harrowhark Nonagesimus, last necromancer of the Ninth House, has been drafted by her Emperor to fight an unwinnable war. Side-by-side with a detested rival, Harrow must perfect her skills and become an angel of undeath — but her health is failing, her sword makes her nauseous, and even her mind is threatening to betray her.

Sealed in the gothic gloom of the Emperor’s Mithraeum with three unfriendly teachers, hunted by the mad ghost of a murdered planet, Harrow must confront two unwelcome questions: is somebody trying to kill her? And if they succeeded, would the universe be better off?

I’ll be honest – after rereading Harrow the Ninth via audiobook, I still don’t fully grasp the plot. But did that affect my enjoyment of the story? No, I am a big confused blob, grinning manically into the middle distance. Tamsyn Muir is just such a talented storyteller, and her words wash over you in a chaotic jumble of cleverness, leaving readers delighted regardless of their level of understanding.

The feeling fits with this story in particular. Picking up where Gideon the Ninth left off, Harrowhark the Ninth (now the First) has ascended to lyctorhood (almost) but has an unfortunate side effect of insanity. She flashes back to events that are almost the same as the first book, but with one massive difference: where Gideon ought to be, Ortus is instead. But Harrow and the readers must piece together what has happened to her as she hangs out on a spaceship with God and her elder lyctor siblings, some of whom are trying to kill her.

It’s interesting enough, but the story picks up like a rocket about halfway through when Harrow runs into some characters that literally made my jaw drop. Soon thereafter, there is the single greatest perspective change in the history of literature. Never has a book’s POV been so important or so subtly important. From that point on, I could not shove the story into my brain fast enough.

Although Harrow and Ianthe are pretty much the only characters that continue from the first book (other than flashbacks), the characters that are introduced are excellent. Augustine and Mercymorn are perfect as entitled, bored, talented 10,000 year old beings, and the introduction of God/John is endlessly entertaining. There is nothing better than to see a nun of the Ninth House prostrating herself on glass before her god, a kindly human who drinks tea, eats biscuits, and horrifies her by patting her on the head.

It’s just been announced that the series will now include four books, with Nona the Ninth coming out in fall 2022!

You can’t read this without reading Gideon the Ninth, but if you’re invested in the Locked Tomb series, this is an excellent sequel!

2 comments on “Harrow the Ninth by Tamsyn Muir”