The inaugural season of the ‘Sports Ball’ fantasy football league came to a close at the end of December 2020. Carrie and the Battling Finger Puppets were crowned champions, but everyone had fun (I assume, seeing as 80% of you are returning)!

What is fake sports without some fake(?) rivalries! These teams love to hate (or love) each other, whether it’s the group chat exploding with banter about Johnathan’s poor choices and Carrie’s blatant cheating (their words not mine) or a who wore it best team mascot onesies competition, you know these games mean something.

The closest of the big rivalry games in 2020. Carrie was let down by quarterback Lamar Jackson, her beloved cowboy Amari Cooper and the Bill’s Defence who contributed -3 points to the Battling Finger Puppets’ loss.

John got some help from wide receivers DJ Moore and Darius Slayton, and played Carrie’s Cowboys defense against her…you monster.

This one was not close. A monster week for Josh Allen helped Team Sorto to victory and a 2-0 start to the season.

Benny Snell and Julio Jones combined produced only 3.5 points for Team Real Slim Brady. Julio has since moved to Tennessee, but will Krista have forgiven him in time for the draft this year? Word on the street is Adriana drafted all the players Krista wanted. Better keep those picks hidden in future, there are eyes everywhere.

In other not close games, the Fire Pandas annihilated the Somewhat Super Seacows and narrowly beat out the Eurasian Collared Doves for the highest score of that week.

The Seacows were probably feeing pretty good about 44.6 points from Davante Adams, but then Chris Carson let them down with only 5.1 points… probably because Tyler Lockett, a wide receiver on the same team, wanted to do all the football that day and ended up with 53 points. Solid performances from the rest of the team secured the Fire Pandas the win and Tricia a night on the couch.

The Eurasian Collared Doves didn’t have the best start to their season. Like the bird after being introduced into the Bahamas in the 1970s and migrating to Florida, they went unnoticed at first because they look much like the Ringed Turtle-Dove. It wasn’t until the mid-1980s that ornithologists realized the suddenly prolific and quickly spreading “turtle-doves” they were watching were actually Eurasian Collared-Doves.

Quite. Week 3 and week 7 saw the Doves sound their victorious coo and rack up the second highest score in both weeks, being beaten to the top spot by the Fire Pandas on both occasions.

Week 7 was also the start of a 3 week winning streak that set the ECD on the path to the playoffs. How like a dove, since according to whatbird.com “some have suggested that their spread represents exploitation of a niche made available by the extinction of the Passenger Pigeon.” Who did you have to kill to get those wins, John?

After a lull in weeks 10 & 11, the Doves soared to lofty heights picking up a win and the second highest score of the week behind the Battling Finger Puppets.

The Eurasian Collared Doves finished 4th in their division and made the playoffs. They fought valiantly into the second round but brought a bird to a sea mammal fight, losing to the Seacows 103.94 to 141.12.

The ECD were guaranteed at least a 4th place finish and faced off against the team that withheld from them the top weekly score twice in the regular season…the Fire Pandas. Alvin “Koo”mara made the difference for the Doves, securing a spot on the podium to end the season.

Best of Beards ‘R Us

There are many methods of choosing your fantasy football team: picking players you like, combing through statistics, buying a magazine or listening to podcasts or asking the simple question…do they have a beard? If the answer was yes, there’s a good chance those whiskered wide receivers and bearded running backs were drafted by Jayse last year.

Did this tactic pay off? I did some light statistical analysis to find out:

Beards ‘R us ended the season with a 7-6 record and fell to the Fire Pandas in the first round of the playoffs.

Over the season, benched Beards scored 284.4 points and starting beards scored 807.9 points. Did they do better than their clean shaven counter parts? Don’t know, they didn’t have beards so it didn’t seem relevant. I see now that that was probably a key measure, but I’ll be damned if I’m going to make a bigger spread sheet to find out. There’s probably a website or a weird video about it. Actually, that’s probably where Jayse got the idea in the first place…

*To qualify as a ‘Bearded Beard’ 50% of the player’s facial hair area on ESPN profile must be covered in fuzz.

Boo statistics! Lets look at some beards in the:

Nick Chubb is a borderline beard, the hair is definitely there but coverage is questionable. Maybe I’m being too harsh or having my opinion skewed by all the bushy beards in the rest of this list. Maybe let that facial hair fill out if you want to get drafted by the Beards again this year.

Big Ben’s bushy bristles caused a social media stir in March 2020. Many blamed quarantine; however, this photo was taken 4 days after lock down started. It was clearly very inspiring – Jayse himself grew this beard in 2021.

Although Davis spent last year filling in for the injured Christian McCaffery, his beard needs no filling in. The shaved head / beard combo is a bold statement and looks good on you, Mike, as attested by this wonderful fan art I found while looking for pics of your beard.

Trimmed and tidy, Clyde may have been a rookie last year but that beard is ready for the pro bowl.

Here it is, the best beard of Beards ‘R Us. Not only did he score the most points for Jayse’s team, he has facial hair so luxurious you could lose yourself in it.

Numbers and Charts of Things 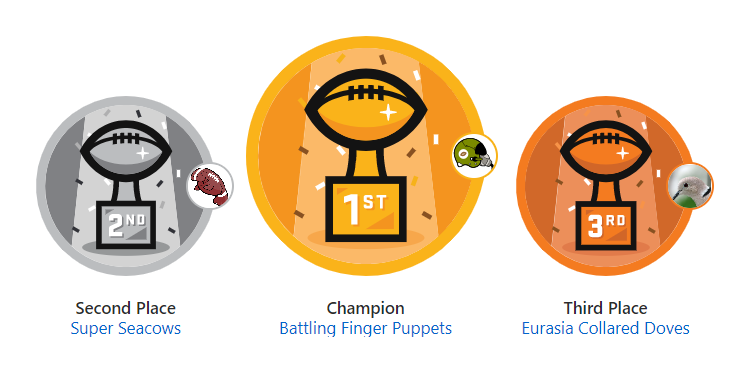 Looking forward to another year of Sports Ball! If you have enjoyed this Sports Ball update, leave a comment and perhaps there will be more!