Draft day! It’s the best day of the year, according to the canned Mathew Berry that spoke to me as I logged in to the draft lobby. That’s perhaps a little hyperbolic, but it was pretty great to see everyone logged in (although Jonathan cut it rather close) and ready to choose their team for the coming season.

Everyone has their own way of preparing (or not) for the draft. When asked on the group chat only one player shared their strategy:

A good tactic, let the computer do the hard work!

Is John trying to make us all think he hadn’t prepared while secretly surrounded by mountains of research? Probably not, as John also asked for a reminder about when draft day was.

On to the Draft!

Starting at the top, it’s app suggestion and name recognition hard at work for Real Slim Brady taking CMC followed by a questionable pick for the Beards – is the beard covering Dalvin Cook’s face enough to count?

The Eurasian Collared Doves let out an emphatic “Noooo” when Alvin ‘Koo’mara was picked 2 spots before him, so John chooses to take the first wide receiver of the draft.

The Fire Panda’s pick seems to value name recognition over app suggestion, but perhaps Tricia knows something we don’t?

Purple Moose takes the best of the tight ends and one of the most reliable players in fantasy football: Travis Kelce.

The Replacements pick up Kelce’s teammate Tyreek Hill. Hopefully Kansas City has a good year, or three teams are going to be disappointed with their picks.

There is some belief in Buffalo in this round with Battling Finger Puppets taking the 4th WR Stefon Diggs and Team Sorto taking Josh Allen.

Double running backs in the early rounds for the Seacows. Heft first, that’s the manatee way.

Eurasia Collared Doves pick up Russell Wilson, and Bad News Bears believe he will be passing the ball to DK Metcalf over Tyler Lockett.

The Fire Pandas are hoping Jonathan is wrong about Metcalf and pick up Lockett. Purple Moose is hoping they’re both wrong and picks up Carson, the Seahawks’ lead running back.

Carrie picks up her QB in round 3, and there is evidence to suggest she has a lot of faith in Jackson this year.

Eurasia Collared Doves are showing the 70 min cram session paid off by picking up one of the top tier TEs with Darren Waller.

Both Minnesota WRs went this round: Purple Moose has their money on Thielen whereas the Bad News Bears like Jefferson. Jefferson has the higher target share but Thielen got all the TDs last year, and the two teams will face off in week 8.

Back to back ‘Robinsons’ for Finger Puppets and Seacows.

Dak is back and on The Replacements; let’s hope he doesn’t need replacing this year.

The word on the street is Detroit is going to have a tough year, but that didn’t put the Purple Moose and Battling Finger Puppets off – Swift and Hockenson are off the board!

Fire Pandas add some orange to their line up with Jerry Jeudy.

Tricia’s cat Rory jumped up on the table during round 7, drafting Damien Harris for the Fire Pandas.

Name recognition strategy coming into play for The Replacements?

We’re in to the bench players now.

In the first of the spite picks, Tom Brady goes to the Seacows. Gotta change that team name now, Krista!

Coutland Sutton is a very dove name. I can just imagine John’s face as he welcomes the Broncos’ wide receiver to the team.

Another controversial beard choice this round, or so I thought until Jayse clarified:

By this point, there’s not much going on other than… 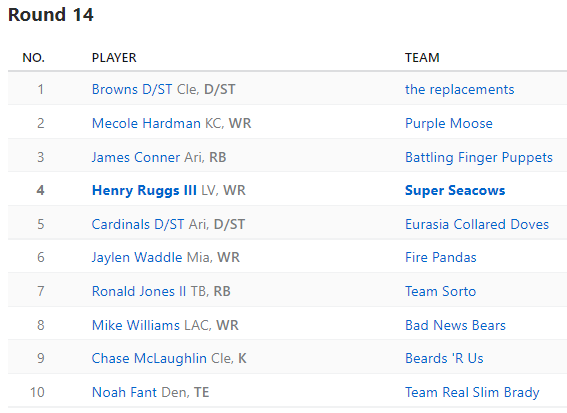 No spreadsheet will be needed this year. Beards ‘R Us drafted only bearded players. Should Jasyse walk away with the trophy this year, we will know why.

On August 29th I excitedly shared the results of a draft I participated in with Krista of team ‘Real Slim Brady,’ the same Krista who last year claimed all her picks were stolen by team Sorto! It seems she learned a thing or two from that experience and this year decided to pilfer from the Seacows…

Does Real Slim Brady have impeccable taste? Possibly. I will concede that a Robert Woods, Matthew Stafford stack does have a certain (but unproven) appeal, however! One pick is a coincidence, two picks is bad luck, but three picks…I call shenanigans!

This is the second draft for several of our new players and Adriana had this to say about her experience:

“No matter how prepared you are, you’ve got to be prepare for the unexpected 😆 which I wasn’t! I had my list of all positions, but it stopped around #26ish on all of them…. So after that, I had no clue who to draft! The draft process was going so fast that I barely had time to keep up with all my lists lol. It was exciting but nerve wracking!

I learned to not get attached to players because there’s no guarantee you’ll get them again 😭 It’s so good to read the updates about injuries and when big names are out, rookies (or not too famous players) will get to step in.”

Wise words from team Sorto. And remember, the league isn’t won at the draft. There’s still a lot of football to be played between now and championship week, and anything can happen!

…That’s right, anything can happen and computers don’t know anything about fantasy football! Just look at this projection:

The computer has no faith in the Beards’ strategy and expects the Fire Pandas to fall from finishing first in their division last year to last overall this year.

Time will tell…and so will our weekly fantasy football updates! Tune in next Friday to see how the season starts!