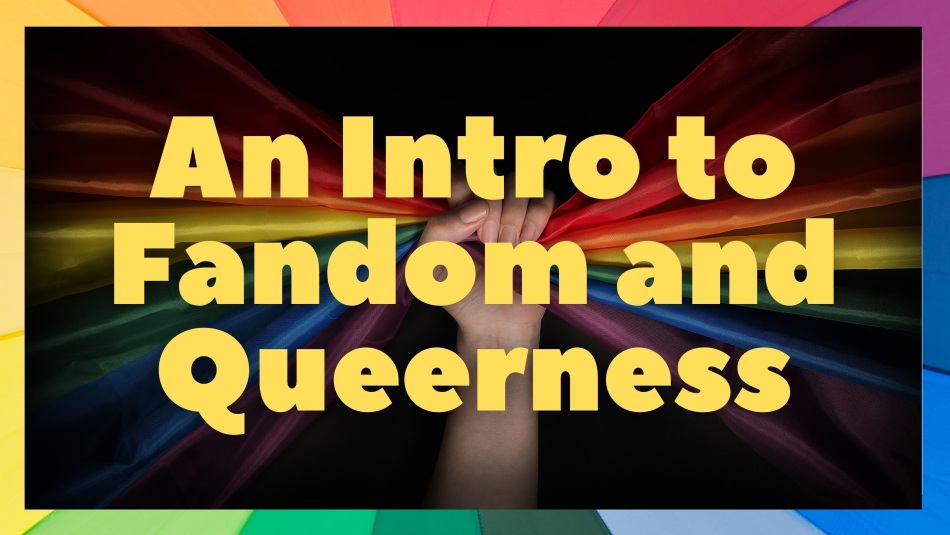 Before I understood my own queerness, I wrote it.

As in, I wrote fanfic of it. I took what I saw on the screen and changed it.

Fan writing (and fan art and creating in general) gives fans of a particular piece of entertainment the space in which to operate outside the canon. Maybe that all sounds like gibberish, but as a fifteen year old blossoming queer girl growing up in a terribly homogenous small town in Ohio, it was an outlet. A way to express the strange, forbidden desires I wanted to see on screen. The things that bound me up inside and made me breathless, imagining those possibilities.

This was 1999, so outside of shows like Will & Grace, anything “gay” on TV was damn limited. The first iteration of Queer Eye for the Straight Guy didn’t come around until 2003, for example.

The first fanfic I ever wrote was Buffy/Faith. It is long lost to the vast graveyard of the internet, where cats with cheezeburgers and terribly creepy dancing babies go to die and make room for new memes and fascinations. I saw these two strong young women standing up to evils and horrors, vampires and scheming plots, and yes, men, and I saw lust and attraction between them. Who else could better understand the particular die with which their fate was cast than the other person in that situation?

Of course, this is not a canon ship, sadly, but I remain, to this day, a fan of it. Because they both deserved better. Because they were perfect for the enemies-to-lovers trope. And they were both hot as fuck.

(We will not be visiting Joss Whedon in this essay cause fuck that dude with a rusty rake.)

After my love of Buffy ran its course, I was still trying to figure out me. My mother had a strange kind of fascination with gay people, seeing them as sideshow attractions while constantly telling me all the time I spent with my female friends was going to turn me into a “lezzy”. Those kinds of extremely mixed signals didn’t help my already confused mind, and combined with growing up in an abusive household, I had to put it all aside lest I get ousted from the only home I had. I was headed to college while living at home (not the best for my individual growth in hindsight), I was meeting new people. Surely the door would open to finding out who I was, right?

One person I met, a gay man only a year or two younger than I, was a doorway into a world I didn’t know of. My internet was dial-up, my phone barely could text, and finding any kind of gay or queer literature or entertainment was seemingly impossible. But this new friend opened a door. Suddenly I was allowed into spaces where gay men and women and anyone else who wanted in could show up and hang out. I discovered Rocky Horror and went to campy costume parties. I had beer and martinis spilled on me on crowded dance floors full of anyone and everyone who wanted to simply exist with like-minded people. I was given a gift. It was like queerdar, and with my eyes open, I could start to find myself again.

But I never left fandom and its queerness.

Class and work during the week was the boring, unsure me. I was too scared to ask the pretty girl in my English class on a date (she later became a good friend and never teased me for thinking she was gorgeous). I was too stuck in my own head about how other people would see me in that little town. I didn’t want to be an outcast or a “lezzy”, sneered at because I was gay. I grew up in a time when sayings like, “That’s so gay,” were hurled around school halls and soccer fields, wielded like a weapon to demean and degrade. To cast the insultee as lesser. So finding a home in fandom made a lot of sense to me, and it let me start to question myself, to figure things out.

I came back to fandom in college, diving into a very tiny group of people who shipped two characters who lived to antagonize each other. Good ol’ enemies-to-lovers trope. I had no idea how gay sex worked and I still cringe-laugh at how I thought the word was prostrate. It’s not like there was a gay Merriam-Webster’s I could use, and I was so goddamn sure of myself. Nothing like a questioning queer cis woman writing gay men incorrectly to make you want to jump out a window.

But I loved the little community around this fandom and the creators I met were all so passionate and vibrant and interesting. There was one person, someone who claimed to be a woman in her fifties, I really connected with. She was alone after years in a relationship with a woman; when the relationship fell apart, she turned to fandom on the internet. She’d been a writer in the Star Trek and Star Wars communities for decades, and was thrilled at how the internet age had brought more people together in fandom. She talked to me about queer love and attraction, we swapped our fanfics and beta read for each other. She was there for me at a time when my head still swirled with words like bisexual.

Real life eventually took over. I finished college, got a job, fell in love, got married. I never doubted who I was, not completely, but I had recognized the layers of my identity through exploring queerness online, in fandoms. I truly don’t know if I would have the understanding I do today without it. And at 36 years old, I still write fanfics. I write stories of love and lust and imbue them with lore and humor. I turn some into fairy tales, others modern AUs (alternative universes) focused on the joy of queer love and attraction. I’m not interested in writing yet another tragedy porn story meant to show how tough our lives are on the outside. Sure, you say, but there’s Pride and all these shows with queer characters and queer romance books and…and…!

Yes, there are. But a lot, if not most, of that didn’t exist even 20 years ago. And if you read stories of those from Stonewall, if you learn about people like Marsha P. Johnson and Harvey Milk, if you read Oscar Wilde and Kit Marlowe and James Baldwin and Audre Lorde, you can see the history, the struggle, the triumph, the secret longing, the intense passion. Fandom started me on a path to figuring out my queerness, a path that led me to those very real people and so many others. The world is a full picture, dark and bright and queer and vibrant and very very real.

I might have started with a Buffy/Faith fanfic so bad I refuse to even try to find it, but those young women taught me an awful lot about myself in the process. Now I just write about mages and vampires and monster hunters and bards and some of it is in fandom, some of it is of my own creation. But I understand myself a lot better now and sure as hell am grateful for a much more open, brighter world. Fascination became acceptance, and then morphed into belonging.

There is nothing quite as brilliant or special as that feeling. Knowing where you fit, if you fit, and how to make your way through a rather unforgiving world. Fandom is a bright spot for me. It taught me how to write, how to compose story and plot. It taught me dialogue and characterization, how to turn a phrase and make a reader fall in love or fall out of their seat. Fandom taught me about myself, but it didn’t stand there with the door wide open. It gave me a key and a series of doors to travel through, and like the gayest closet-cum-magical gateway, I got to waltz through once I understood the dance.

0 comments on “An Introduction to Fandom and Queerness”