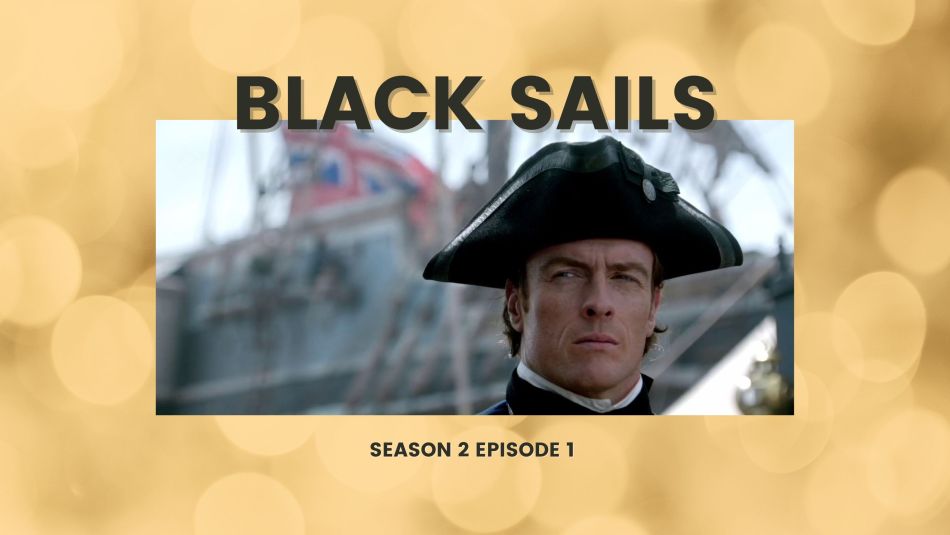 Season two is my favorite, and rewatching its first episode only reminded me of how right I was to think so!

Annoyed that Silver of all people volunteered to take the ship with him, Flint insults his only partner, takes off his shoes, and starts swimming to take the Man O’ War all by his goddamn self.  His insane determination is so charismatic, and no one can resist its pull.  Least of all Silver, who sighs and takes off his jacket to follow.

Silver!  The partnership between Flint and Silver that began in 108 is flourishing here.  They are SUCH a great team.  Despite being so different (or because of it), they work together incredibly well, filling in each other’s weak spots and pushing each other to do more and be better.  For MUCH more flailing about their scenes together, head down to the Fragmented Thoughts section.

This is such a funny episode!  The dynamic of Desperate Silver trying to win over No Fucks Left to Give Flint is constantly hilarious, culminating in the truly masterful scene in which both of them are caught by the Spanish crew.  Just minutes after assuring Flint that he has no reason to distrust him, Silver sells him out in exchange for gold and freedom.  Flint’s face goes gloriously twitchy as he chair-hops over to murder Silver with…his face?

Silver bails, and then RETURNS TO THE RESCUE!  Flint gives Silver a quick strategy lesson, at which point:

Silver:  So I actually have to fight him?
Flint:  Well, what the fuck did you think was gonna happen?

Silver’s face, and Flint’s voice crack of exasperation KILL ME.  Like, mad cackling into my hands at these fools.  I love them so much.

We get our first flashbacks to Flint’s past, and I am here for it.  Finally, after a season of watching a man pursue a vision so fiercely that it compels him to murder his closest friend, we are starting to find out what led him here.

It is in these flashbacks that we see a very different Flint – in fact, in 1705 that’s not his name at all, but James McGraw.  He’s very cleaned up and VERY attractive, and in his conversations with Thomas Hamilton, we see his role reversed.  Thomas is the idealistic one with plans for redeeming Nassau, and James is the one declaring how impossible that plan is.

We also get our first glimpse at Civilization proper, a London of beautiful buildings, clean clothes, and nice manners.  As per the show’s theme, the ugly underbelly of this facade is quickly revealed when James takes Thomas to view a pirate hanging.  He knows that piracy flourishes because it benefits the British empire to create a monstrous enemy to fight against (“Civilization must have its monsters.”)  In order to eradicate piracy, the empire must change, and James doesn’t believe this is possible.

Their conversations reveal another theme: complementary partners.  Thomas is idealistic but with no experience (he’s never even been to a pirate hanging before, despite his deep interest in the pirates of Nassau).  James has a lot of experience, but no ideals.  Time will tell how this partnership will work out, as it will also address the success of the present-day complementary partnership between Flint and Silver.

Flint:  You almost got us killed!
Silver:  Almost.  Almost!
…
Silver:  You are truly amazing, you know that?  We’re both better off now than we were two minutes ago, yet you’re angry about it because it didn’t happen your way.  Might you consider for a fucking moment that your distrust of me is completely unwarranted?  I warned you about Billy.  Was I right?  I found you over Mr. Gates’s body, and did I do anything but defend you?  When you were sinking to the bottom of the sea, who do you imagine it was who dragged you onto that beach?  Brace yourself, but I’m the only person within a hundred miles of here who doesn’t want to see you dead.

“Great men aren’t made by politics, Lieutenant McGraw.  They aren’t made great by prudence or propriety.  They are, every last one of them, made great by one thing and one thing only: the relentless pursuit of a better world.  The great men don’t give up that pursuit.  They don’t know how.  And that is what makes them invincible.”