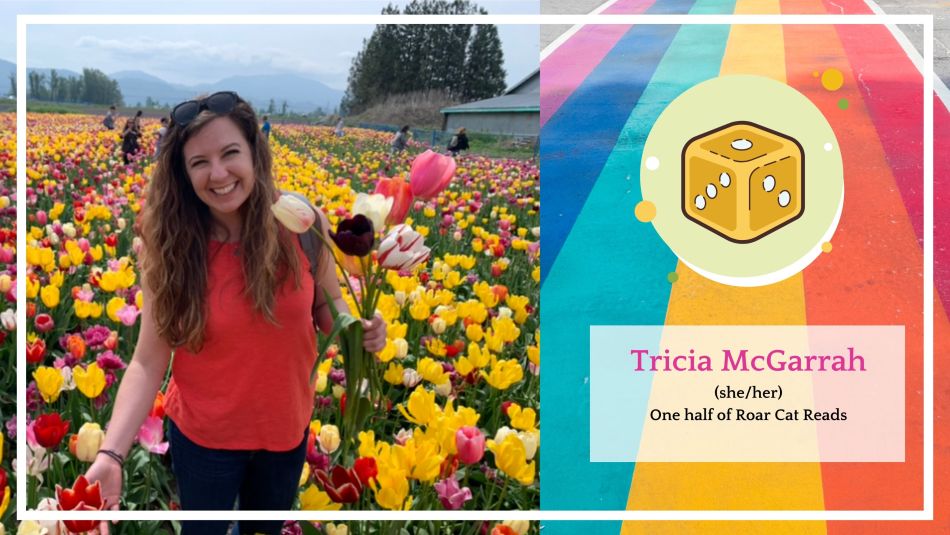 Tricia McGarrah (she/her) is one half of Roar Cat Reads (along with Rachel). She writes the book reviews and tv recaps, and her favorite part running this site is hearing and telling the stories of fellow Adventure Queers.

Tricia, what made you want to start playing D&D?

I have always been a pretty big nerd, but D&D felt like it wasn’t for me for most of my life. Partly that was the conservative Christian message that it was satanic, but it was also because it seemed to be dominated by boys who wanted to micromanage fun times. It wasn’t until five years ago or so that I started to be intrigued by the game. I was a fan of the McElroy family, and their version of D&D in The Adventure Zone was silly and inviting. When I saw a tweet about a group of young girls turning feral wolves into a friendly wolf army, I knew I wanted that. When I moved to Vancouver, I thought finding a group to play with would help me make friends, so I reached out in a Nerdy Ladies of Vancouver Meetup group. You (Rachel) were the person who responded, so I’d say it worked out pretty well for me.

I’ve been lucky that all of my D&D experiences have been exactly the vibe that I hoped for. I know there are some queer nerds who are rules lawyers, but everyone I’ve played with has been primarily invested in having a good time and telling a good story.

What has been your most fun D&D experience?

There are so many to choose from, but one of my favorite sessions was infiltrating Governor Patricio Cabello’s soiree in our pirate campaign. I was playing my favorite character Bahasha, a nonbinary hadozee whose high charisma stats mostly involve bulldozing people with dumb charm. There were Beauty and the Beast-esque makeovers, bonding over mispronounced aperitifs, and gunshots in the bathroom.

It was the perfect balance of player hijinks and actually advancing the plot, which is an almost impossible scenario!

What games or systems do you hope to play in the future?

We bought Thirsty Sword Lesbians a few months back, and the system seems exactly designed for me. It’s all furtive looks over crossed swords, experience based on character growth, and advantage based on relationship strength. However, my brain is the antithesis of a rules lawyer, which unfortunately means that I feel entirely unable to learn/teach a new system. If anyone reading this has the book and wants to talk about the mechanics or GM a game, I would love to be included!

This blog launched in March 2021. What inspired you to start Roar Cat Reads?

I have always dreamed of owning a bookstore, and when I met you, that dream morphed into a book/game store. We were snowshoeing last winter, and at the time I happened to be feeling really stuck in my job. But I also had no real idea how (or if) my career dream could ever turn into a reality. You challenged me to find a way to take a step toward being a part of the Vancouver nerdy scene, and a blog seemed like my best bet. I was a daily blogger for almost a decade starting in high school, so churning out content didn’t intimidate me.

Although I dabbled in some non-queer nerdy media at first with the blog, it quickly became clear that queer and nerdy should be our niche. I’ve really loved focusing in on this specific subset of nerd culture – it’s encouraged me to read books that might have slipped my radar, and it gave me an excuse to talk about Black Sails again. Most importantly, it has connected me to so many interesting people through the Adventure Queer series and our Discord community. Whether we stay a website or someday live out my shopfront dreams, I always want to create a space that is first and foremost welcoming to “women, femmes, and thems” (a phrase my friend taught me). There are plenty of spaces for cis white heterosexual nerds; I hope Roar Cat Reads is the space for everyone else.

If you were stuck on a desert island, what three nerdy books would you take?

You recently got into a new podcast – talk about it!

Oh, you mean We Can Do Hard Things with Glennon Doyle? Readers, you should know that this is a very clever move on Rachel’s part. I’ve been bugging her with anecdotes from podcast episodes for the last week, and she’s found a way for me to purge my feelings! Some of you might know that Glennon wrote Untamed, the late-in-life-lesbian’s bible. I loved her books back when she was a progressive Christian, and it has been incredibly convenient that she has written about her life evolving in basically the same way mine has (assumed we were straight but in a mostly uninterested way until we met a woman who turned our world upside down).

The fact that Glennon’s partner, Abby Wambach, is a lifelong lesbian and sports queen, has caused me to entirely relate my relationship with Rachel to theirs. This is maybe not the healthiest practice, but I am LOVING the episodes in which they discuss sexuality, gender, sex, conflict, and just about everything else. They’re passionate, funny, and really honest. I highly recommend the podcast to everyone!

What is in store for the future of Roar Cat Reads?

So many things! Our charity event raising money for Rainbow Refugee is this Saturday, October 16th. I hope everyone will watch the full day of D&D that is GMed and played by queer people on Twitch, and if you’re able, you can donate or bid in our silent auction.

We’ve been talking to the Vancouver Pride Society about potentially coordinating some events for Winter Pride. It’s not confirmed, and whether we get to be involved or not, I hope everyone keep them on your radar! They have some great plans in the works.

We also hope to expand into some pop up shop experiences in the next year. It would be a chance to sell Rachel’s Mini Monstrosities and dice bags as well as books, but more importantly, we could play D&D and board games with the community we’ve developed. It’s wonderful how much can be done online, but there’s something special about playing together in person.