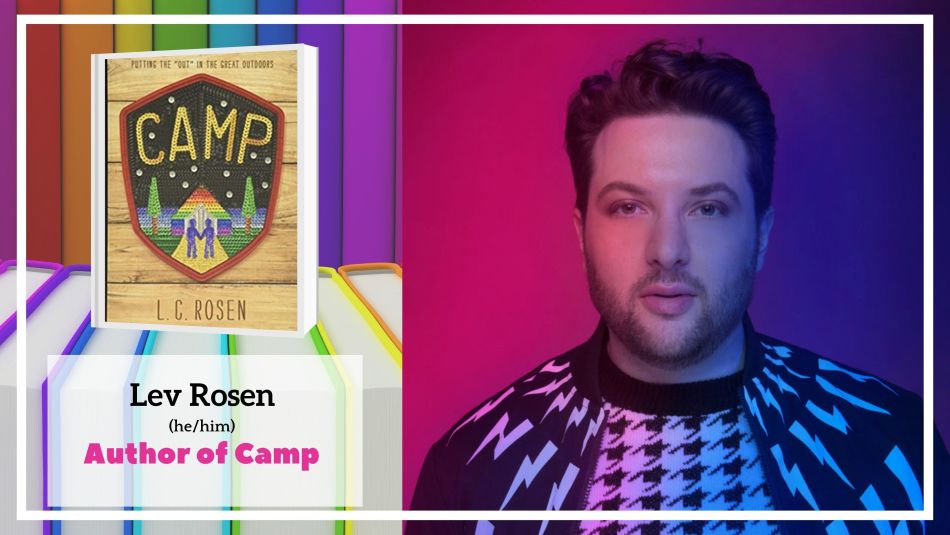 Lev Rosen writes books for people of all ages, most recently Camp, which was a best book of the year from Forbes, Elle, and The Today Show, amongst others and is a Lambda finalist and ALA Rainbow List Top Ten. His next book, Lavender House, will be released fall of 2022. He lives in NYC with his husband and a very small cat.  You can find him online at LevACRosen.com and @LevACRosen

Your novel Camp takes place at a utopian summer camp for queer teens, Camp Outland.  Was it inspired by any real life camps or experiences?

There are in fact several queer camps around the country, but Camp Outland wasn’t inspired by any of them in particular. Physically, though, it’s based on the Jewish summer camp I went to as a kid and worked as a teen for several years – though that was a very different experience. But I used that camp as a good blueprint for where to put activities, cabins, and secret spots.

One of the central themes of the book is learning how to balance your own personality with allowing growth based on the preferences of others.  Why do you think this is an important idea for readers, especially teen readers, to consider?

I’m not sure I’d phrase it that way – “allowing growth based on the preferences of others” – I think that implies we can grow trying to be someone else for someone else, and while that might be what happens at first, I think Randy’s growth comes from himself in the end, from discovering that this persona he’s created actually has a lot of him in it already, parts of himself he didn’t know about or get to try on, not that he’s growing into someone else for Hudson. What’s important about trying on new identities, though – whether inspired by an ill-conceived romantic plot or just a desire to change – is that a lot of queer kids don’t get that chance. The moment you come out, you’re often labeled the queer kid, and no matter what you do, your actions, attitude and choices are thought of as being an extension of that. The only way to get out of that is to not be thought of as “just” the queer kid – one way to do that is by surrounding yourself with other queer people, who won’t view your sexuality as the central part of your personality. But the only other way to fix that is by reminding straight people that queer kids are entitled to just as much identity experimentation as straight ones, and to let them go through that without making it about their queerness.

In Camp, just about every character is a queer person.  This is quite a change from the days in which we were lucky to get one gay side character in a story.  Why do you think it’s important to write books that are entirely centered on queer teens and adults?

Well, I think there are actually a lot of queer YA books coming out these days that have more than just a few queer characters, but the real reason I wrote a mostly queer cast is because I just don’t care about straight people. Their opinions on my sexuality, on queer teens, on what books are appropriate for queer teens – I do not care. We’ve had centuries of books with entirely straight casts. Time for some with queer casts. I mean, it’s only fair we have just as many books with all queer characters as we do book with all straight characters. And if people disagree with that, it’s good to ask why.

Camp Outland is a safe space for queer people, but it’s removed from daily life by nature of being a summer camp.  What are some practical ways we can create safe spaces for ourselves and for other queer people in our daily lives?

I mean if you’re straight, the best thing you can do to ensure a safe space for queer people is to stay out of it. That’s my biggest piece of advice. The other thing I think we as queer people should do is find each other and remember that we’re a family. We might hate other queer people, or love them, or find them annoying, but in the end, these folks are part of your community, and you have to welcome them in at least somewhat. That’s not to say you should remove yourself from the straight world entirely (I mean, if you can, more power to you). That’s nigh impossible, sadly. But take space for yourself where you don’t have to perform for straight people. Where there’s no concern about being too gay about being not the stereotype people expect from you. And straight people, like I said, stay out.

You have a new book coming out in fall 2022.  What can you tell us about Lavender House?

Lavender House is an adult book, but it also features an almost entirely queer cast – in the 1950s. It’s a detective story, very Knives Out, in which a San Francisco police detective, having been caught on a raid on a queer club, is fired from the force. He thinks his life is over, but is approached by a woman who asks him to investigate the murder of his wife. She takes him to a manor outside the city where there’s a wealthy family united around a lavender marriage (a marriage between a gay man and a lesbian which is just for appearances). There’s been a murder, there’s plenty of queer suspects, and plenty of fun. It’s a bit Chandler, a bit Christie, and very gay. The only thing I will say, and I hope this is obvious anyway, is it’s not a big happy lovefest like Camp. This is about a queer guy in the 50s, it’s not a pretty story, and the family is bickering and infighting. But I wanted to show the ways queer people existed before Stonewall and had their communities and families. The best part is it’s the first in a series; the second is scheduled for fall 2023, and will follow the same detective investigating more queer mysteries. When your identity is a crime, you can’t go to the police when a crime is committed. Queer fiction and crime fiction go hand in hand, and I’m so excited to get these books out there.

Are there any other queer books (or other media) that you would like to recommend to our readers?

SO MANY. One book that’s coming out soon and is getting a lot of Camp comparisons is Robby Couch’s Blaine For the Win, which is like a gay YA legally blonde where a queer kid runs for class president to prove to his ex he’s not a ditz, essentially. I’m also so excited for Dahlia Adler’s Home Field Advantage – a cheerleader and the first female football player at high school fall for each other. I’ve read this one and it’s not just an amazing sweet romance, it’s also a real exploration of the ways queer people find each other in homophobic environments and support each other. I’m also excited for Adib Khorram’s Kiss and Tell, about a queer boybander, and how his role as a queer celebrity involves navigating who he really is vs. the fetishized and sanitized version of queerness his label wants him to be. So I’d recommend pre-ordering all of those. There are many many amazing looking queer books forthcoming, though. Those are just off the top of my head.

For more information on Lev Rosen and his work, please visit his website.