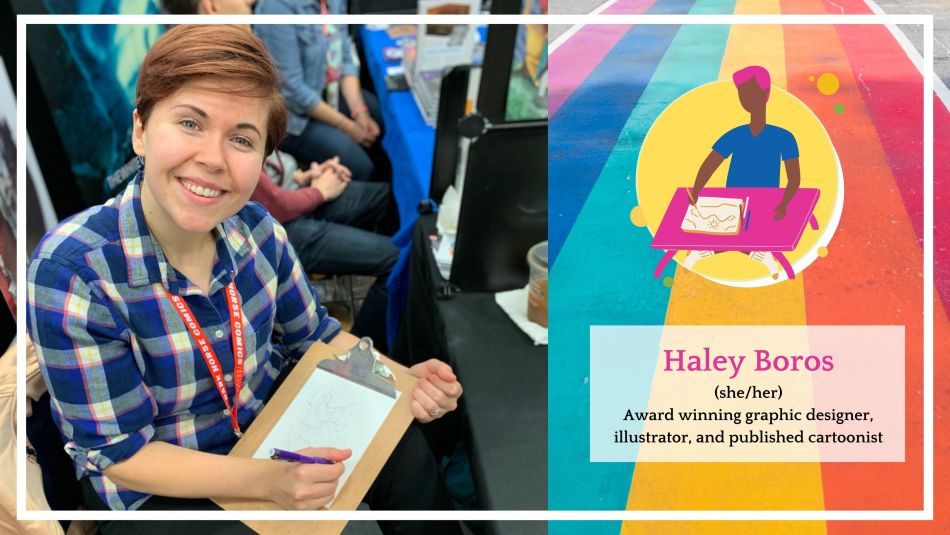 Hello! I’m Haley Boros, my pronouns are she/her, and I’m an award winning graphic designer, illustrator, and published cartoonist. Outside of my career in the label printing and flexible packaging industry, my creative practice focuses on whimsy and fantastical creatures – think dogs doing fantasy jobs! I’ve contributed to several comic and art anthologies since 2017, most of which can be found on my website at haleyboros.com. You can also become a patron of mine at patreon.com/hihaleyboros, or follow along at @hihaleyboros on twitter and instagram!

How did you begin playing/DMing D&D?  What is your favorite aspect of the game?

My first experience playing in a roleplaying game like D&D was when I was in high school and hanging out at the local game shop (Bastion Games). Chad Charest and I grew up together and we would go there on Wednesdays to hang out. We were invited to play in the attic of the store and, while that campaign didn’t last for me, I went on to play in many different groups over the years.

During my time playing tabletop games, I’ve been a player more than a DM. I have had the opportunity to run three one shot campaigns, two of which were modules and one was written by myself! That one was particularly wonderful: picture a cozy comic convention on the east coast of the US, in Bethesda, Maryland – and in a hotel room, 4 cartoonists got together to storm a library as their respective characters. Dust mephits! Lots of flying books! It was quite the adventure I planned (with help from my husband Jessy, of course!).

I’d have to say the best part about playing is getting to know my characters and their backstories. I feel like I’ve always created fun characters, most with interesting parts about themselves (I’m partial to skin and eye pigment distinguishing features like heterochromia and vitiligo)!

As a bisexual woman, have roleplaying games helped you explore or express your queer identity?

Unfortunately, I can’t say that playing roleplay games has! I’m a late queero, coming out after I married my husband in 2016, but knowing who I’ve been my whole life and kind of affirming it, I haven’t seen a shift in exploration of who I am through roleplaying games…yet! I’ve played with a few of my friends that have introduced a whole spectrum of sex and gender identities, but I’m itching for more!

You have contributed as a cartoonist and illustrator to several projects, including Faerie Fire, a 5e supplemental Anthology and Welcome to Mina’s: A Diner Comic Anthology.  You are currently promoting Fantastic Frights, a comic anthology coming to Kickstarter in October 2021.  How do you decide what projects you would like to participate in?

Great question! With so many things in my creative career, I’m drawn to projects that I could really see my skills lending well to. With those specific projects – I reached out to Shan Campbell, the editor of Astrolago Press and publisher of Faerie Fire, to see if they needed more artists since their stretch goals kept climbing and climbing on the kickstarter.

With Cloudscape comics, I’ve always wanted to be involved with this local society! I met a few of the collective back in 2012 at the very first VanCAF and have been following their projects ever since. Welcome to Mina’s is the first comic I’ve contributed to Cloudscape, creating the art to Dino Caruso’s lovely story about two women that fall in love over the years, connected by the warmth and atmosphere that is Mina’s diner. I’m drawn to stories with heart at their core. With Mina’s, it’s the shared love between two strangers turned friends turned partners throughout the decades. Ultimately, I leave a lot of my projects up to the decisions of editors, as many anthology projects are submission based, and their decisions are what fills my plate with projects. I just love creating stories with other people and I don’t think I’ll ever stop.

Can you tell us a little about Fantastic Frights as a whole as well as what you contributed to the anthology?

For sure! Fantastic Frights is an all-ages fantasy/horror comics anthology that will feature stories in order by least to most spooky. I’ve been told it’s a modern day love letter to those pulp horror stories of the 90s and early 2000s – but with a fantasy twist! When it comes to fantasy and horror comics, those two genres blended together have become one of my favourites.

My story is with Amy Chase, whom I’ve worked with on a couple other past comics projects (see: They Have Issues: Tales from comic book stores), and it’s about a little girl that has a plush canada goose that watches over her as she sleeps. Only, at night, our good knight goose comes to life to fend off unsightly dust bunnies and other bumps in the night. I imagine this story to be at the very beginning of the anthology, although the editors haven’t said where it will be – but given the subject matter, if it’s right at the beginning, I bet it will give this anthology a really great opener.

I have seen you selling pet portraits on Twitter – they are so cute!  How did this start, and how do you capture the spirit of someone’s pet?

Thank you! I’ve been doing commissions for quite some time, but my pet portraits started at the first VanCAF I exhibited at, in 2017. It was also my first year on the board for VanCAF too, and I was excited to show off my work. It really just took off from there. Often when I’m in artist alley’s at comic conventions, I’ll offer pet portraits for a base price and scale up from there based on size, colour, that sort of thing. When I’m drawing a pet, I like to focus on areas that draw me in and I also ask the client what is one word to describe their pet. Like a little bit of tuft fur that always seems to stick up in that specific way, an ear that flops back, or even a sassy pose!

What makes my portraits stand out is that I like to mix them up with D&D classes too. You might get a roguish lizard or a lovebird that’s a wizard! Once I show the client the finished portrait and I get to see the look on their face seeing their loved one – especially if the portrait is for a pet that’s passed on…just pure happiness on their faces. I love it.

What art prompt challenges can we expect to see you participate in in the coming months?

Well, this month I’ve combined Doggust (August) and Swordtember (September) prompts! I don’t have a completed title for the series yet, I’ve been calling it Dogs with Swords (very original), but if anyone comes up with a better one, I’ll give you a copy of the completed, printed collection, on me! I may do a third volume of Three-Legged Tales in October? I have yet to decide and in typical me fashion, I leave my decisions down to the last few days before the month’s challenge starts.

Other than D&D or comics, what nerdy interests are you most excited about right now?

Two come to mind immediately: Astronomy and Video games! I’ve always said that if I wasn’t an artist, I would probably be a scientist studying astrophysics. There is always some amazing news coming out of the field of Astronomy and I just love doing science research. In regards to video games, I have my own Nintendo Switch that I pour hours of play into. Games like Animal Crossing, Cozy Grove, Spiritfarer, Zelda: Breath of the Wild, Pokemon – all of the great chill or open world RPGs. And yes, I do have the limited edition Animal Crossing switch, ha!

Do you have any recommendations of queer nerdy content that you would like people to know about?

Oh you bet I do! I’m currently reading Tillie Walden’s On A Sunbeam, a queer space graphic novel set in a world with mystical space creatures and there are even some fun little LARPing happening in panels too. It’s been on my to-read list for awhile and I’m just adoring it. Also set in space is Becky Chamber’s A Long Way To A Small Angry Planet, another sci fi story that has queer characters and just lovely character building. I wish I could say I’ve been watching more TV and movies than I am, but Jessy and I LOVE watching The Circle (a new season just dropped) and that show is one great human experiment, mixing different identities, politics, gender, all sorts of human interactions – without ever seeing the person on the other side of the screen. It’s just so fun.

Thank you again for having me as part of Roar Cat Reads!