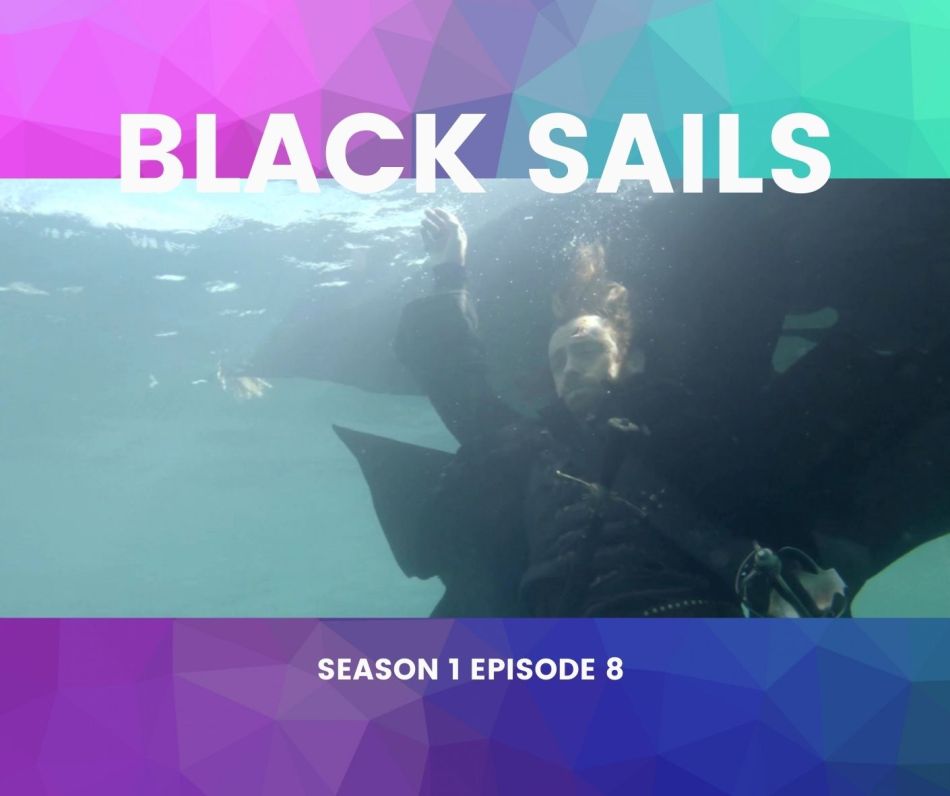 The hunt for the Urca is on.  Everything changes for Eleanor.  Bonny and Rackham’s sins come back to haunt them.

This episode is FANTASTIC, and my notes while rewatching it become increasingly caps lock-y, culminating in a brief mental breakdown because of my love for Flint.

Literally every scene with Flint in this episode is Top Notch, but I’ll highlight one in particular:

After aligning the ship to fire on the Spanish Man O’ War, Dufresne accuses Flint of “tyrannical crimes” against his crew.  When no one will obey Flint’s orders to fire, he strides down the stairs to light a cannon himself.  Dufresne SHOOTS HIM, at which point he CRAWLS along the deck to light the cannon.  Even though the fuse is taken from him, it does not stop this from being the sexiest display of determination I have ever seen.

Silver!  I suppose it is fitting that in Gates’ last episode (RIP), we see Silver stepping up to be Flint’s right hand man.  Their partnership is the show’s central relationship, and I think this is really the first time we see how powerful they are when acting together.

It’s just one thing after another:  When Silver walks in on Flint after he’s just murdered Gates, he immediately sides with Flint, no questions asked about what has just happened.  Then Flint hides and tells Silver what to say to the Spanish ship.  Silver later tries to talk Dufresne into being calm, and when that is unsuccessful (leading to the aforementioned Flint being shot and unable to light a cannon), it is SILVER who shoots at the Man O’ War and makes the fight inevitable.  Finally, when Flint allows himself to sink, it is Silver who pulls him out and makes sure his wound is bandaged (this is explicitly addressed in episode 1 of season 2, but it’s implied here).

In the previous episode, we saw how desperately Flint needed an ally that shared his vision.  Although Silver shares this vision only so far as it pertains to him acquiring some gold, they are undeniably a good match.  Both smart men who can create new plans in an instant, they are formidable when working together.

Jack’s finally got the brothel in order thanks to Max, and Mrs. Mapleton is unhappy to see her profits decreasing.  When she threatens to expose his past misdeeds, Jack pauses before saying, “Well, Mrs. Mapleton, that sounds like gross insubordination to me.  That, coupled with the graft you’ve been responsible for, leaves me with no choice but to terminate your employment here.”  And later, when he and Max are basking in their victory, he says, “Please don’t judge me, but I really enjoyed that.”

We’ve got to talk about Flint murdering Gates, yeah?  WOW, is that not any easier to watch, even knowing it’s coming.  This is mostly because the previous scene between Flint and Gates, in which they share a drink and laugh about old Craig who drank a bottle of piss, is so much weightier when you know what’s about to happen.  I love the ambiguity of the scene:  does Flint think things are okay between him and Gates?  Is he hoping a boy’s night drinking will MAKE things better?  Or do they both just truly realize that they might die the next day, so they may as well set politics aside and have a good time?

But it’s not enough.  When Gates sees that the Urca isn’t where they thought it would be, he’s done.  Flint is mad, thinking that Gates means to see him hung as a pirate.  But he is FURIOUS when he realizes that Gates wants something worse for him:  to be sent with Miranda to Boston.  This is DEVASTATING to me, because in his attempt to do something “better” for Flint, it shows just how little Gates understood him.

As Daphne and Liz always say in their podcast Fathoms Deep, this is the scene in  which people really get sold on Black Sails, because how can a show present us with a scene of a man murdering someone he called friend…and we’re left pitying the murderer??  God, Toby Stephens is amazing, and the writing is just gut-wrenching.  “Please, please don’t do this.”  “This is not what I wanted, I’m sorry, I’m sorry, I’m sorry.”  And after it’s done, he is so protective of Gates against Silver, and even strokes his cheek!

All this, and we’re left wondering, “What could POSSIBLY be fueling this man to do such heinous things that even HE obviously finds heinous?”  Hehehe, we’ll have to get there in season two!

Max:  You have nothing to be sorry about.  I was standing between you and your dreams for this place.  You did what you had to do.
Eleanor:  I thought you said this place was just sand.
Max:  Sand has its virtues.  On sand, nothing is fixed.  Nothing is permanent.  Fates change so quickly.